This post is also available in: Italiano (Italian) Deutsch (German) 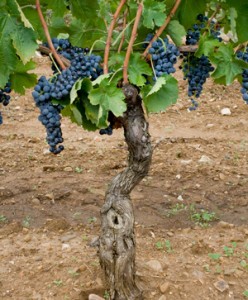 Aglianico is a very ancient grape.  Many experts, poets, writers, conosseurs  have written about Aglianico.  The most renown and important is certainly the latin poet  Orazio who wrote “Nunc Est Bibendum”. Grapes and wines have always strongly distinguished the Vulture area and Basilicata in general.  The Romans allowed  the Venosa colony to coin  a bronze medal  reproducing Dionisio, Divinity highly linked with the soil and the vineyards , later on, absorbed by Bacco’s cult.    In a much more recent historical time ,in 1629,  there are traces of such a wine called  Melflacum, of which Prospero Rendella  speaks in his “Tractatus De Vinea Vindemia  Et Vino”.  By another big historical jump you reach 1909, when, according to Carlucci, the Vulture area ,in Basilicata, was praise worthy, where the  eastern  and south, rich hillysides , were covered with prosperous Aglianico vineyards;  and this grape was not grown only on the extinguished volcano slopes , but even on the whole province territory, more or less depending on  the places:  out of 124 Communes forming Basilicata, Aglianico was grown on 104 ones and on 40 of these Communes, relevant extensions were destined to this grape. And from here up to our days, the denomination of controlled origin (D.O.C.)recognition in 1971,and to the new adventure of Aglianico, which became a luxury product on the Italian tables and abroad.

According to the most reliable sources, Aglianico  was introduced in Italy by the Greeks, but some historical experts attribute its growing even to V-VII century before Christ.  Likewise, even the Aglianico name has uncertain origins.  The appellation could have been  originated by the ancient city of Elea  , located on the lucanian coast on Tyrrhene. Or alternatively from Greek  ancestors   who took the name Hellenici  and who could have been disembarked on  the Jonio  lucanian coast  even  17 generations before the beginning of Troja war.  This opinion is supported by the hypothesis that, originally, the name Aglianico was Hellenico or Eleanico or even Ellanico.

The  change from Ellenico or Ellanico to Aglianico may be referable to a time between XV and XVI century, when the Aragonese power included the  Naples reign. In fact, from Ellenico or Ellanico to Aglianico the step could have been rather short, considering that the double “L” of these appellations  in Spanish has the same sound as the group “gli” of Aglianico, in Italian  language.

Just in this period, Aglianico  would have reached an  enormous  success  around the Courts at that times. But you can find  writers of the Vulture wine  even in more ancient years.